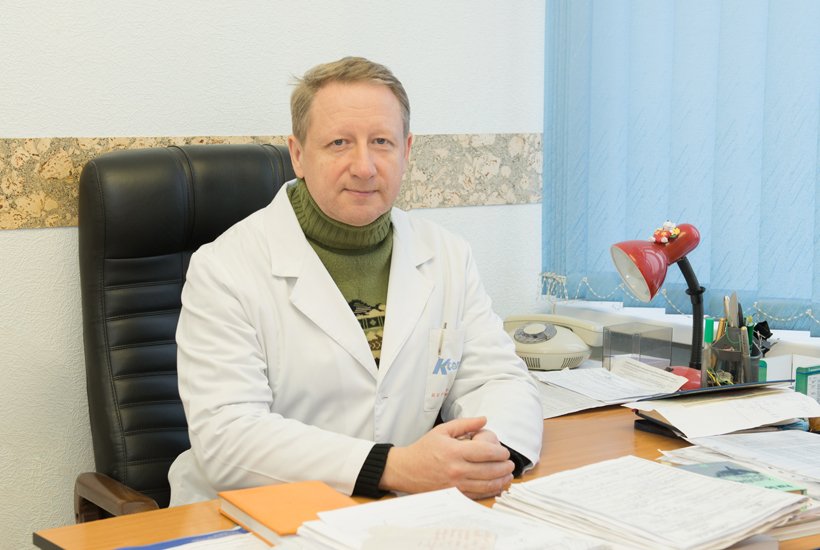 Mrachkovskyi Valentyn Valentynovych - Urology Head, the superior category cancer surgeon, Ph. DIn August 1947 Kyiv City Health Department Protection issued an order on the organization of an oncoDepartment of urology as part of the Kyiv City Oncology Dispensary on the basis of the Central City Clinical Hospital named after October Revolution (now Alexandrian Central Clinical Hospital), and on October 17, 1947 such first department in Ukraine and USSR was opened for 40 beds. The initiator of the organization of the department, its first head and scientific adviser was one of the leading urologists of Ukraine was Professor B.L. Polonskyi (1947–1953). In 1954–1974 the head of the Department of urology was A.G. Polushkina, in 1974–1980 – V.S. Sakalo, in 1980–2001 – B.I. Papakin, since 2001 to the present time – Valentyn Valentynovych Mrachkovskyi.

The necessity of organizing such a department was dictated by life: oncourological patient is first of all an oncological patient, he requires a special approach both in diagnostics and treatment with the use of oncological doctrine features, as well as prolonged dispensary observation.

From the first days of work of the oncoDepartment of urology of the Kyiv city Oncology Dispensary methods of modern diagnostics, combined treatment, as well as medical examinations of oncourological patients were developed.

For today the whole spectrum of surgical treatment of patients with neoplasms of the genitourinary system of both malignant and benign nature is carried out at the modern world level in our department. Complex reconstructive operations, orthotopic intestinoplasty of patients with cancer of the bladder are carried out. Young patients are operated with preservation of sexual function. In case of tumors of the kidney with tumor thrombi in the veins, complex interventions are performed, in particular, using the apparatus of artificial circulation. In case of lesions of adjacent organs and the presence of single metastases, combined operations are performed, including removal of metastases. Patients with prostate cancer undergo radical prostatectomy.

The greatest emphasis of the department is given to organ-preserving treatment (resection of tumors) in tumors of the kidney, testis, penis, and bladder. Extensive removal of regional lymph nodes is performed to ensure a better oncological result.

Tweet
More in this category: « Department of Operative Gynecology